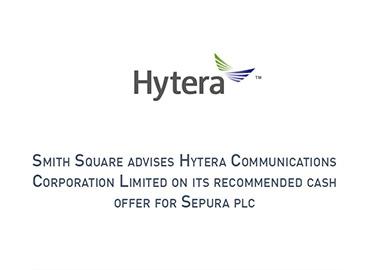 On 24 May 2017, Hytera Communications Corporation Limited (“Hytera”) announced that its wholly-owned subsidiary, Project Shortway Limited (“Bidco”), had completed the acquisition of Sepura plc (“Sepura”), announced in December 2016. The acquisition valued the entire issued and to be issued ordinary share capital of Sepura at approximately £74 million (enterprise value c. £150 million) and was implemented by means of a Court-sanctioned scheme of arrangement.

In addition to the bespoke Chinese regulatory conditions, the acquisition was subject to a number of European competition and public interest reviews, including a Public Interest Intervention Notice (“PIIN”) issued by the Department for Business, Energy & Industrial Strategy in the UK (only the seventh such notice issued on national security grounds and the twelfth since 2003 when the Enterprise Act came into force). The PIIN was concluded successfully with the Secretary of State accepting the undertakings agreed between Hytera and the Home Office.